This is the ultimate guide to spending 2 days in Bangkok if you want to dose up on your temples but also want to throw something a little different into the mix!

This is how we spent our 2 days in Bangkok!

To be honest with you… we were actually in Bangkok for 3 days, but as we landed in the morning and were extremely tired, the first day was a write off. But, resting on the first day meant that we had all of the energy that we needed to explore to the max on the following 2 days!

The Grand Palace and the Temple of the Emerald Buddha

This is a must do if you’re visiting Bangkok, and especially if its your first time in Thailand, it will really set the tone for the rest of your trip!

The Grand Palace and the Temple of the Emerald Buddha is in the heart of Bangkok. The best way to reach it is by boat – the river Chao Phraya is the main water way in Bangkok and is very important to the Thai people. You can pick up a one way ticket for as little as 15 THB each.

The closest pier to where we were staying (in Si Lom) was Sathorn Pier, which is right next to Saphan Taksin BTS station. Ask for a ticket to The Grand Palace and make sure you get off at Tha Tien pier which is 7 stops (15 minutes)

Both men and women should dress appropriately. They both should cover their knees, so men, if you want to wear shorts make sure you have and are comfortable with wearing a sarong. And women… if you’re wearing s tank/vest top wearing a shawl over your shoulders apparently is not enough! – I had long trouser on with a vest top and used my sarong to wrap around me which completely cover my shoulders and chest and I was still sent to the little shop to buy a t-shirt. I was told it was “too sexy”. Luckily I had a shirt with me which I put on.

TIP: Also NO RIPPED JEANS! We totally didn’t even think about the fact that Ells had the smallest rips in her jeans ever, but because it exposed part of her knee it was not allowed and she had to wear my sarong round her waist!

The Palace and temple are open from 8:30am – 3:00pm. We thought that by getting there just as it opens that I would be really quiet, however, we were wrong! It was absolutely heaving which leads us to believe that regardless of what time you go, there will always be big crowds!

If we were to go again, we’d probably try just before it closes, to see if there is a reduction in the crowd! But make sure you allow yourself at least 30-45 minutes to walk and observe all that there is to see! (Maybe longer if you’re a slow observer!)

EVERYONE knows about Khao San Road, and if you don’t… what cave have you been hiding in!? A road bsustling with bars, bands, booze, market stalls, massage places and FOOD! After the Grand Palace we were super hungry so we jumped in a Tuk Tuk and headed for our favourite little street food market stall for some Pad Thai.

As the traveller hub of South East Asia, Khao San Road is in the heart of Bangkok. If you get lost, just ask someone, anyone – they’ll be able to tell you. Even the Tuk Tuk drivers see your backpacks and assume that you are heading to Khao San Road even if you are not!

Not that far a walk from the Khao San Road is the Phra Sumen Fort – one of two forts left in Bangkok built to protect the city in the 1700’s. As it’s so close you must add this to your itinerary, especially if you want a little peace and quiet after the madness of the Grand Palace and Khao San Road.

Just a 10 minute walk from Khao San Road, it would be a crime not to take the short journey here! If you don’t have google maps, just head to the river, as the fort over looks the river closest to Khao San Road!

You can’t actually go inside of the Fort but the park and the area around are free to all who stumble upon it!

The Ghost Tower is Bangkok’s infamous abandoned building! Once upon a time it was going to be a skyscraper, a premium usury apartment complex but due to Asia’s 1997 financial crisis the Thai baht severely dropped and the building works were brought to a halt! 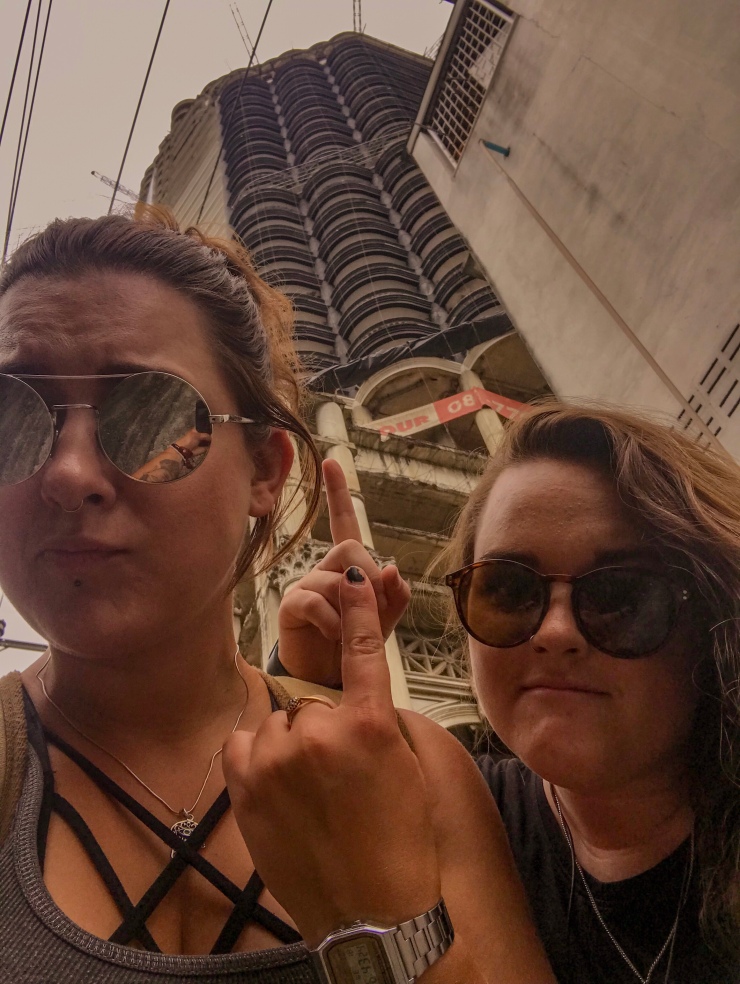 If head back to the Sathorn Pier (you will have probably noticed the building on your way to the pier for the boat ride to theGrand Palace). When you hop off the boat head towards the MRT station to the right but instead of heading up the escalators, just keep walking! Once you get to the crossing at the lights, cross over and walk to your right. At this point you would have noticed the tower by now (if not, you must have really bad eyesight!). 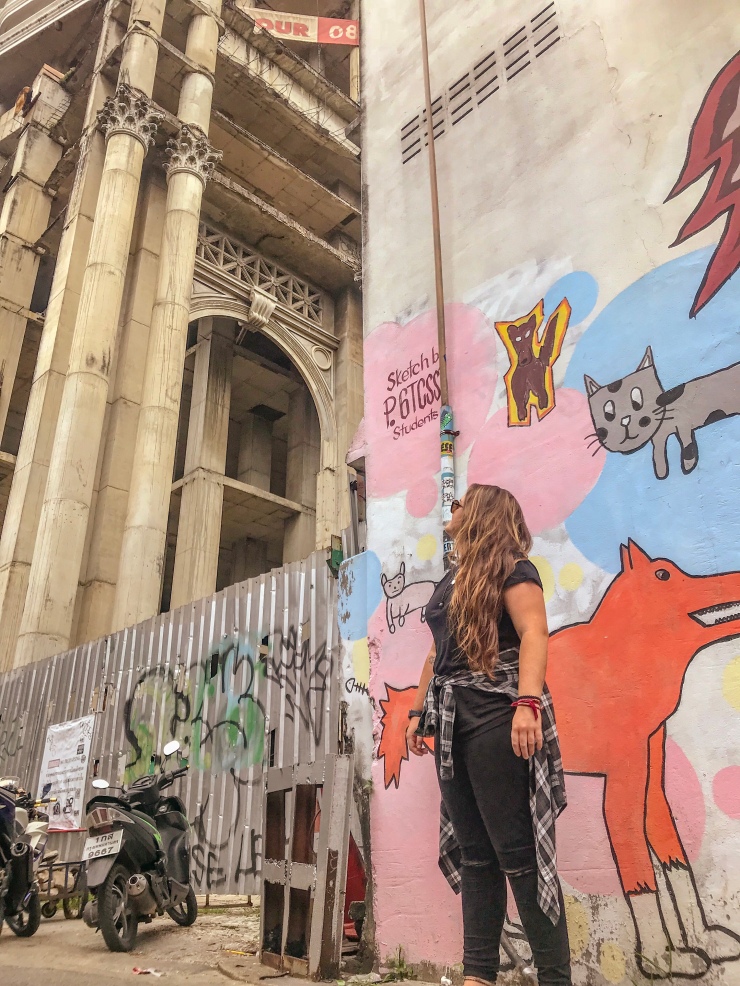 As you get closer to the tower, locals will stop and tell you not to climb the tower, and if I were you (unless you’re an amazing free runner) I wouldn’t climb the tower. A. You will be trespassing and B. The ground floor doors are welded shut, so you’ll have to climb the exterior of the building to the first floor before you can free roam/climb. And C. It’s an abandoned building in Asia… no health and safety!
We promised the locals that we wouldn’t be climbing it… we just wanted to get a little closer to take some pictures! They let you pass, as long as you promise not to climb!

Obviously free as it is private property and not open to the public to actually go inside.

Now this may not be for everyone, but if you like Unicorns (who doesn’t!?) then this place is a cool place to stop off for a coffee and cake (if you’re not Gluten Free). Everything, and I mean everything is covered in Unicorns!

Funnily enough, the Unicorn Cafe was a 5 minute walk from our hostel… didn’t plan that one at all… *cough*cough*

No cost of entry, but obviously you do have to buy a drink/cake to sit down in the cafe. As you’d expect, the coffee and cake are a little over priced but nothing compared to U.K. prices!

We were due at the airport at 7pm for a 9pm flight to Chiang Mai so we had to squeeze as much as possible in. So up we get, early doors, to get a head start on our last day in Bangkok.

We had recently heard whispers and seen a few posts about the Airplane Graveyard, and after our experience with the abandoned aircraft in Bali (Click here to find out more on Abandoned Aircraft in Bali) we were determined to get up close and personal with these ones.

How to get to the Airplane Graveyard – Again, travelling from Si Lom, we opted for the train/boat to avoid taxi’s/grabs/tuktuks and find our way by public transport. Catching the train (subway) to Phetchaburi was only 25 TBH each (£0.57 / $0.75) and for the sake of a 10 minute journey with air conditioning – an absolute bargain.

From here we needed to get on the boat to Wat Sriboonreung. This was different to the boat we had taken to the day before, it was a smaller boat on a much smaller river. At the pier (just a short walk from the train station) there was limited English on the signs and not a lot of people around to advise us. Still, we persevered and a kind local pointed that we wanted the boat going right down the river.  When that boat came along, we hopped on board (literally, you have seconds to think about it) and realised within seconds (via GoogleMaps) that we were going in the opposite direction.

TIP: if you get the boat to the Airplane Graveyard, you want the boat going in the opposite direction from Central Bangkok.

After jumping off, waiting for the correct boat, and 17 THB each later (£0.39 / $0.51) we were on our way, amongst the locals on their daily commute, cruising along the river, looking forward to seeing the shells of what once carried travellers like ourselves around the world. 45 minutes later and we arrived at Wat Sriboonreung pier, just a 10 minute walk from our destination.

TIP: if you’re hungry when you arrive, we grabbed some food from one of the restaurants in the supermarket on the way. Freedom supermarket, a couple of dishes and two drinks for around 250 THB (£5.70 / $7.50). Not the cheapest, but certainly not the most expensive meal we’ve experienced here in Thailand!

There is a family that have unofficially claimed the land as their own and charge you an entrance fee, bit cheeky but eh what the heck! They’ve got to make a living some how!
There were rumours that they charge as much as 600 THB (£13.70/$17.99) per person but others had said that they had gained entry upon paying just 200 THB (£4.57/$5.99) – so that’s what we had in mind to barter down to. Luckily when we arrived they immediately asked for 200 THB so there was no need to barter!

You’ll see the planes before you see the gate to enter, more than likely. The land is almost ‘manned’ by a family that have set up home there.

It was quite eerie at first, just like it’s weird to see anything like an airplane, boat or building that’s now left, abandoned and derelict. Straight away though we had the urge to check out the biggest one there, a Boeing 747 – often referred to as a ‘Jumbo Jet’. 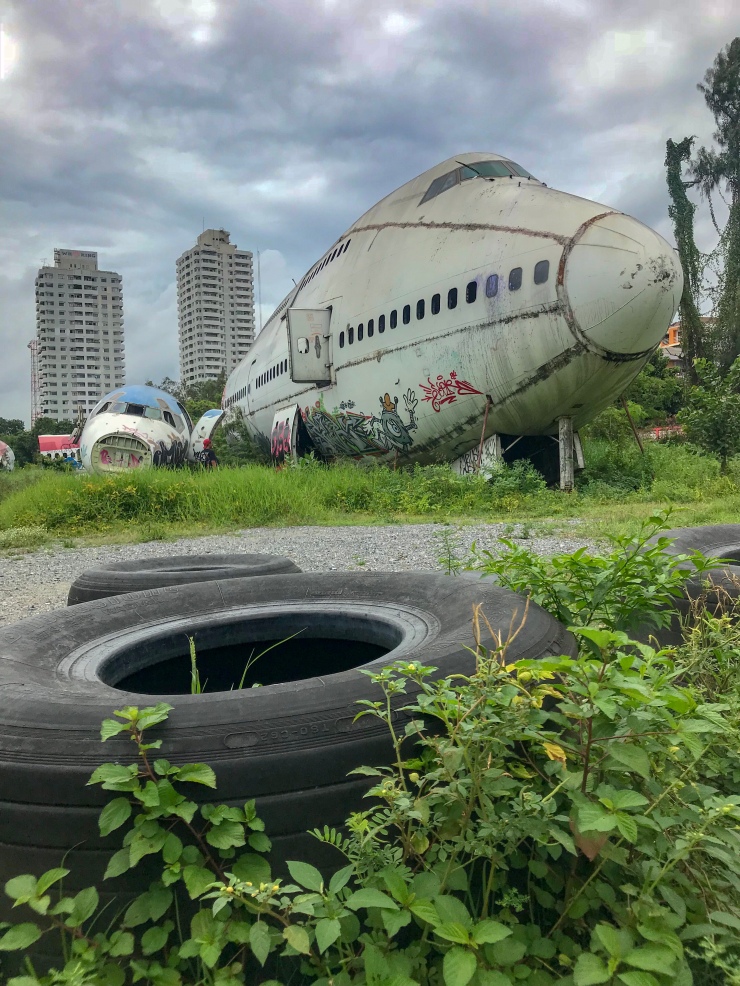 Luckily, as it isn’t your ‘everyday’ tourist attraction, there was no one else there. The only time we have ever stepped on to one of these beasts was through a typical jet bridge. Never, have we stood at the base of such an aircraft and admired the size of it. We walked round the jumbo jet at first, just checking it all out and taking it all in. We were also looking for our perfect photo opportunity! Then we headed to where the opening was, climbed into the belly of the beast and found a ladder taking you up onto the first deck. 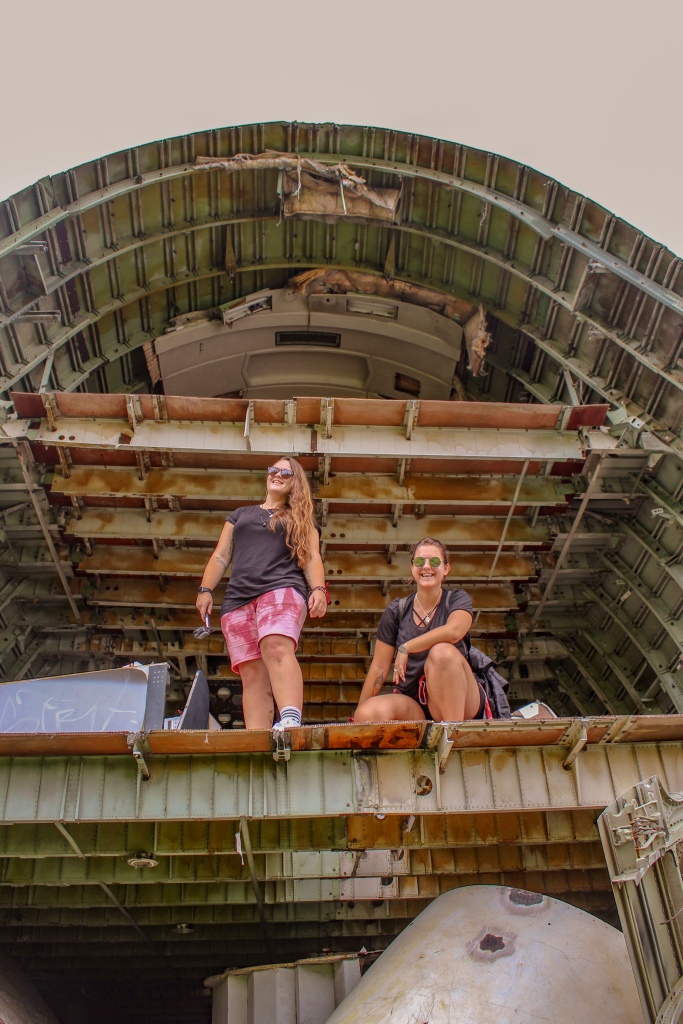 We spent a good hour or so exploring each of the planes before heading back to the pier.

TIP: please, please, please take extra precaution when exploring the planes. There are sharp rusty bits sticking out everywhere and holes in the floor which aren’t very well covered. As this is Asia there obviously aren’t any safety precautions, so just make sure you are super aware of your surroundings and make sure you wear trainers at least – NO FLIP FLOPS!

TIP: As it took at leats an 1.5 hours from the moment we left our hostel to get to the Airplane Graveyard and scheduling in grabbing some lunch, we recommend that you allow the day for this trip – getting there and back is a 3 hour round trip on its own, so make sure you have plenty of time!

If you manage to get to all or even just one of these locations we’d absolutely love to see your pictures! Tag us (@we.are.wandering) in them on your Instagram.

One thought on “How to spend 2 Days in Bangkok”